Kings Boxing Academy senior squad travelled to Barnstaple ABC on Saturday 6th November. The 3 boxers who were matched had made gruelling preparations in the gym to mix various styles and skills and were primed and ready to take the fight to their opponents back-yard. As always the Kings’ Braves are deemed the under-dogs and is now a formality to box on away territory.

The team travelled with 2 brothers Ryan (21) and Finn Addiscott (18) along with the squad’s longest serving boxer George Clark (22).

The first to enter the ring was older brother Ryan Addiscott (78KG) who was matched to box Eric Rydd (76KG) of Barnstaple ABC. The first win of the event for Kings’ as Ryan took every round to secure a clear unanimous points decision.

Next out for the squad was Finn Addiscott (62KG) who hadn’t boxed for almost 20 months due to Covid, matched against Tom Smith from Skemers ABC Bristol. Finn recently had suffered an illness which had effected his training, stamina and performance but he was raring to box and get back into the ring. The Bristol boxer was strong and aggressive pushing forward to draw Finn into a fight but the Kings’ boxer used skills and sharp punches to contain Smith and score clean accurate punches winning by a unanimous points decision.

The final boxer out for Kings’ was George Clark in a re-match with Barnstaple ABC’s Cameron Squire, both being strong middle-weights with good experience and skills who were using this bout as a warm up for the Championships. George had to work hard and dig in to score the crisper punches and namely the right hand landing on the temple area to capture the judges eye. George had clearly out-boxed Squire and contained his power-shots to win the fight but unfortunately the win for George was a majority decision?

The club always have enquiries to join and seek competitive males and females join the club, they even run an open gym session for keep-fit, please see our Facebook page 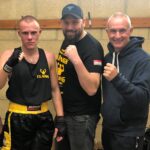 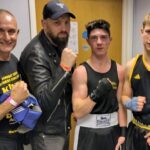 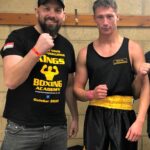