Kings Boxing Academy finally break-out of lockdown to compete in Balham in London.

The Covid pandemic tore every aspect of the club apart and to gather up the remaining pieces to save the club and hold it all together was a mammoth mission. This year has been difficult for the team as their head Coach has been incapacitated which has hindered the concise technical training he brings to the squad, but the team had committed themselves to make do as best they could to produce boxers ready to compete.

The club has been previously blessed with their Head Coach Chris Rattenbury winning the Teignbridge Sports Coach of the year and also busy supporting local charities helping raise funds for the Ex-Veterans, Rowcroft and Devon Air Ambulance. 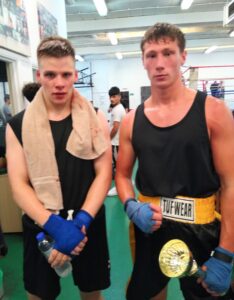 On 24th July two boxers from Kings B A travelled to London to take on two Balham Braves. First in the ring for the squad was 20-year-old Ryan Addiscott (77KG) who was in his first contest. Addiscott was in a 50/50 contest put all his skills and efforts in to beat Johnathon Clarke (79 KG). It was a close well fought contest but the Kings’ boxer took the bout in the 3rd round where-by the ref had to step in and stop the contest. 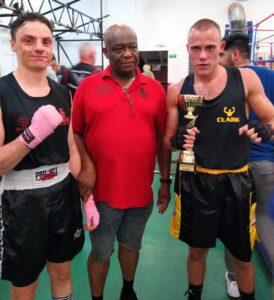 Raring to get back after 20 months out was 22-year-old George Clark (72 KG), his lack of sparring and concise coaching left concern for how he would perform in the ring. Clark who is also a competitive footballer was fit and chomping at the bit to box after reaching the National finals in 2020 only to miss out due to contracting the flu. His opponent was James Beedle (69 KG) who had a decent 15 bout record. Clark from the 1st bell went at his opponent throwing punches from every possible angle out-classing the Balham brave taking all three rounds and winning by a unanimous decision.

The club are proud to be back out competing and hope to stage their own show 2nd October. There are a few select places available for beginners who wish to compete for the squad please apply via Facebook or chrisr230.sg-host.com