Kings Boxing Academy shine with brilliant bouts in London with Kings’ young braves competing against two of the best clubs in London.

It’s certainly been a mixed season for the boxers at Kings with some very controversial decisions leaving a bitter taste from away results when our boxers clearly have won. Kings boxers have evolved over the past 3 seasons and are highly regarded in the boxing division along with a National Champion in the camp. The word on the circuit is ‘you are going to be in a real fight with a Kings boxer, they come to win’. This makes the club either a first choice to box a King’ or to avoid us, the team have boxed away all season in everyone’s back yard and beat virtually all of them all but you don’t always get the win in the opponents home-town. The team was called out to box on the Peacock show in Barking London on May 18th despite having been matched by other clubs for the same day. The Teignbridge club had offers flying in including a challenge for the clubs middle-weight George Clark, sadly his opponent pulled out the day before making it an almost impossible task to find him a worthy opponent. 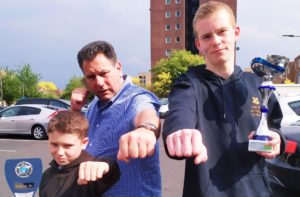 Kings took two junior boxers to London, first out was Levi Chiplin age 12 (33KG) this was his first real bout having only one skills bout to gain his experience. His opponent was from the renowned Finchley club (the home of Anthony Joshua) who had 9 skills bouts and 3 full bouts to his record; Levi was thrown into the deep end to mix it with the best and benefit from the contest. Levi won all three rounds with his superior boxing skills and sharper punches which has given him huge confidence.

Next out for the Devon club was Joe Kneen age 15 (73KG) a big puncher with a chin to match, his opponent from the Times ABC in London had been challenging Joe for some weeks wanting to eliminate the Kings boxer after knocking out all his previous opponents. A challenge Kings will always rise to and the Devon brave was bashed from pillar to post but the better skills and ring-craft saw Joe take the win and out-class the Londoner. Well dissevered wins for Team Kings!