Kings Coach Awarded for Commitment to the Community

The icing on the cake this season for Coach Chris Rattenbury was that he was invited to Kingsteignton Town Council for a formal event, sadly he was away judging as an official at the Saltash boxing show and unable to make the event. He was invited once again with his Champion boxer Charlie Ryder to receive the Citizens Award for his outstanding volunteer work as a coach and commitment in the community. Kings Coach felt he didn’t deserve it as he was just doing his duty to the sport and society as a volunteer but when it was pointed out all the commitment and exceptional things he had contributed to the sport and young people he warmed to the idea. 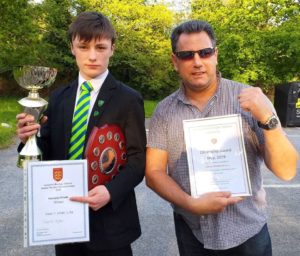 A well deserved award for a befitting boxing coach Chris Rattenbury who has developed and guided his club to major titles, boxing glory and benefiting hundreds of young people to engage in positive life-styles for over 20 years. The club are proud to have such a valuable asset and the boxing community on the whole, his efforts and coaching have proved time and time again a winning combination and the proof is in their winning record.