Once again Kings Boxing Academy return triumphant with another outstanding victory in London.

The team are riding high with their top Champion boxer Charlie Ryder who took another high ranking London scalp, returning with the London ABA welter-weight Challenge Belt. It was cause for celebration for the Teignbridge club’s big win. Charlie Ryder fought against a highly experienced opponent William Rusher on Saturday 1st June.

Rusher hailing from the Camberley ABC club was in great shape seeking to prove he was going to out-box and give the Devon club a lesson in ring-craft. Kings Novice Champion was standing in his way and was ready to take on the London fighter to prove who really was the King of the Ring in the 66 KG division.

Ryder had been under a lot of pressure as he was in the middle of taking 25 exams while at school as well as preparing to take on a National level opponent who had far more bouts and experience than the Kings boxer. This did not deter Ryder who wanted a big win to end the season and raise the profile of the club.

The contest was very tough and in front of a crowd of ex-Champion boxers including Michael Watson, Colin McMillan, Morris Hope, heavy-weights Derrick Williams and Julius Frances to name a few. We had to come away with the win to prove that Kings Boxing Academy is now a top club producing excellent boxers and to stamp our authority over the big London clubs. Kings now have a great reputation and we have nothing to prove, we earned our stripes the hard way. 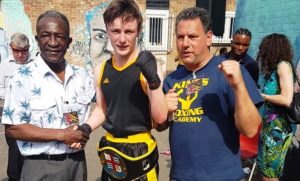 Charlie Ryder boxed intelligently and is turning out to be a class boxer taking his opponent to the limit and defending well against the sharp counter-puncher. Full credit to this outstanding athlete who is an inspiration to the whole team.